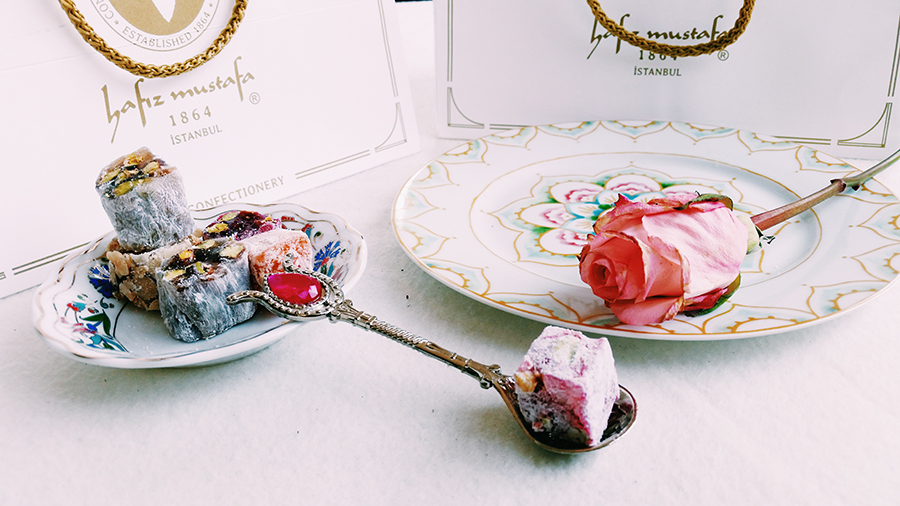 The Turks are famous for their sweet treats but nothing is as quintessentially Turkish as Turkish Delight (known as ‘lokum’ in Turkey). On my recent trip to Istanbul we were greeted with the candy as we boarded our Turkish Airlines flight and when we arrived at the hotels. In the 10 days I was in Istanbul I’m pretty sure I consumed over a kilogram of the candy. Needless to say I’m pretty obsessed!
Lokum means morsel or mouthful but can also come from the Arabic phrase “rahat-al-hulqum” which means “comfort of the throat”.

Turkish Delight or lokum is said (although unconfirmed) to be the invention of confectioner Bekir Effendi, affectionately known as Haçi Bekir. He lived in a small Anatolian mountain town and moved to Istanbul in 1776 where he set up a sweet shop. All the candy available at the time was very hard in texture so it was only a matter of time before the soft, chewy lokum found its way to the royals.  Haçi Bekir’s business still stands today and you can find it on Hamdiye Caddesi near the New Mosque. I popped in on my visit and was pleased to be told that his descendants are still very much involved in the business.
In the 19th century an unknown Briton who travelled to Istanbul fell in love with the sweet and reportedly shipped cases of it back to Britain under the name ‘Turkish Delight’. The candy soon gained status as a major delicacy in Europe amongst the high society of the time. It was common for upper class socialites to gift each other Turkish Delight wrapped in silk and lace handkerchiefs. (Girls, we should bring back this tradition!)

Turkish Delight is made from starch and sugar which is formed into a gel. It can be flavoured with rosewater (the most common), mastic, lemon or other fruit like pomegranate and orange and filled with dates, nuts and dried fruit. It is then dusted with powdered sugar to prevent sticking. Turkish Delight contains no gelatine. The sticky, jelly like texture is created by the boiling of the starch. If you are purchasing Turkish Delight or you’d like to try a recipe do check the ingredients and make sure that it doesn’t contain gelatine else it won’t be the real deal.

Turkish Delight is not overpoweringly sugary. It should have the perfect amount of sweetness and you should be able to distinctly taste the delicate flavours. It is usually eaten alone (in abundant, almost illegal amounts) but it the perfect accompaniment for a strong cup of Turkish coffee.

My favourite one has pistachios in it but I also love the plain rose and lemon versions.
I brought home some Turkish Delight from the famed Hafiz Mustafa which is one of the oldest confectioners in Istanbul.
Until next time
Love and sparkles
Zaakira xox